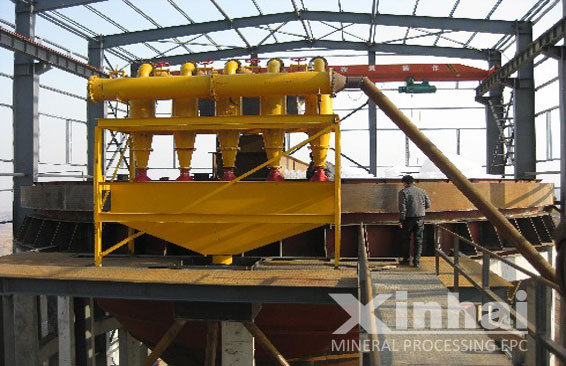 Spiral Classifier is a kind of mechanical classifier. It is composited by a u-shaped water tank, spiral device, transmission device, lifting mechanism, bearings and other parts.

Hydrocyclone is a kind of grading equipment using centrifugal force, and mainly made up by the feed tube, cone, cylinder shell, sand mouth and overflow pipe, etc.

The working principle of hydrocyclone is as follows. Under the pressure of 0.5-2.5 kg / cm2 in the inlet, the pulp was feed into the cyclone cylinder along the tangent direction of the feed tube. A great deal of centrifugal force was produced because of the rotations of the inside part of hydrocyclone. Under the action of centrifugal force, the coarser one was thrown to the wall, along with the spiral descent flow, and was discharged from the discharge mouth. The fine pump form an upward spiral flow in the center of the vertebral body along with water and discharge through the overflow tube.

there are many advantages of hydrocyclone. Such as simply constructed and has no moving parts; the small size covered small footprint. The advantages are more apparent when working together with a large ball mill. Of course, the hydrocyclone has its shortcomings, such as the pulp needs the head of the pump to delivery and needs stable working pressure when working. It has a higher demand for the particle size and concentration of the pulp, what else is that it can be worn more serious.

Spiral classifier has more significantly highlighting advantages compared with hydrocyclone. It is reliable and easy to operate and the staging area is smooth and finer overflowed particle size can be obtained. What's more, the trough slope is easier for sand to return into to the ball mill. In addition, some of domestic mining machine manufacturers make some improvements to a spiral classifier. For example，Yantai Xinhai mining machinery company has added a sand-returning automatic lifting device in the sand-returning end of the spiral classifier, in order to substitute the tablespoons head of the ball mill. That makes the ball mill run more smoothly. The spiral classifier also has poor overflow bearing seal at the bottom of the spiral classifier; what else, a finer classification overflow fineness is difficult to get especially when the asked overflow granularity is -0.074mm and accounts more than 90%.

Overall, spiral classifier and hydrocyclone are widely applied in our country, each of them has his strong point.