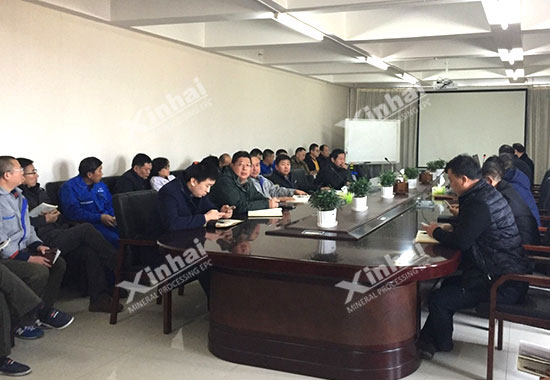 On January 5, 2018, 1st middle-level cadres monthly meeting in 2018 was held in the second-floor meeting room. Xinhai senior executives, department heads and relevant personnel more than 60 took part in this meeting.

In order to strengthen management, improve efficiency and service capacity, Xinhai has implemented monthly report system of middle-level cadres since 2013, which required every senior executive, department head to make the monthly report according to their appointed work. The report involved work completion, working plan for the next month, personnel rank, how they ranked other departments according to technical support and public administration, which support they provided for other departments, which support they received from other departments, and what recommendations they made for company and other departments. Senior and middle-level cadres report would be held monthly, and every department would be marked monthly. The scores were given by department leaders fairly according to their performance in this month. Xinhai would give different levels of reward and punishment to the top three and bottom three departments. At the same time, Xinhai required all departments to take advice seriously, then provided textual feedback after the meeting. With the implementation of this system, the overall management level of internal departments and company level had been improved greatly.

Annual monthly meeting work was summarized at this meeting. Mr. Yunlong Zhang firstly read out department ranking in December 2017 and annual departments ranking in 2017, then praised outstanding departments and relevant personnel in the past year. In addition, Xinhai also gave cash awards as departmental funding to the top three departments according to reward mechanism, besides, Mr. Zhang would issue "Xinhai Annual Advanced Team Award" at the annual meeting. In the New Year, Xinhai will strengthen department construction, enhance the overall service consciousness and service level, then provide better service for our customers.

At the monthly meeting, Mr. Zhang also proposed that Xinhai would reform middle-level cadres' monthly meeting, especially the implementation of opinion exchange model of the new department. Aiming at solving opinion absolutely, Xinhai decided to change text reply. Executive department head directly replied in front of all departments and leaders, then came up with solutions.

At the meeting, Mr. Zhang also said, in order to comply with Xinhai international development strategy, Xinhai was planning to adopt foreign language learning & training assessment mechanism, which can encourage foreign departments and workers to improve their foreign language level. On the one hand, Xinhai staff can improve cultivation of personal qualities; on the other hand, Xinhai people can make a little contribution to expand the overseas market. In addition, Xinhai also encouraged other competent employees to learn technical knowledge actively, and strived to be a versatile talent, then contribute to "Xinhai Dream".

Qinwang Han, chief executive of Xinhai, made a list of requirement for annual meeting and selection of "Xinhai Star". What's more, he also asked each staff to show our new image in the new year, strengthened spirit civilization, and provided strong spiritual support for the future operation!Since its establishment in 1997, Xinhai has passed through 20 years. In the coming 2018, Xinhai people will meet the test of a new era with full enthusiasm and new performance, and continue to achieve great success in the continuous, healthy and rapid development.

The common eight failures of the press filter machine and their solutions!