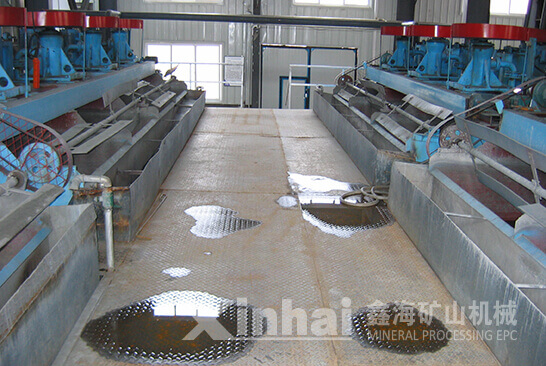 A Brief Introduction of the Jet Flotation Machine Principle

Jet flotation cells are mainly composed of the inlet, injectors, pipes, downcomer, cells, frame and discharging means. During operation, the slurry is fed through the feeding pipes to the center of flotation cells impeller. The slurry will dash off under the effect of the centrifugal force of the impeller rotation. While the negative pressure is formed between the impeller and the cover plate, so the air can be automatically sucked into the intake pipe. On the other hand, when the impeller rotates, the slurry and air well be mixed and stirred sufficiently, while the refined foam and much small foam emerged, and the mineral materials will adhere onto the foam. This mineral foam emerges on the surface of the slurry, then the concentration can be achieved. Generally, this is the principle of the jet flotation cells.

In the jet flotation cells, impeller cover plate plays an important role, not only in the formation of negative pressure, but also can play the role of a certain degree of steady flow, while preventing sedimentation of the pulp being deposited on the impeller, and to avoid affecting the normal operation of the impeller. Using the principle of the jet flotation cells, many manufacturers produce jet flotation cells, including Shenyang mining, Liao Chung, Nanchang, Xinhai heavy machinery and mining machines. With various models and superior quality, Xinhai Mining Machinery enjoys a good reputation, and the one-stop service is trusted by customers.