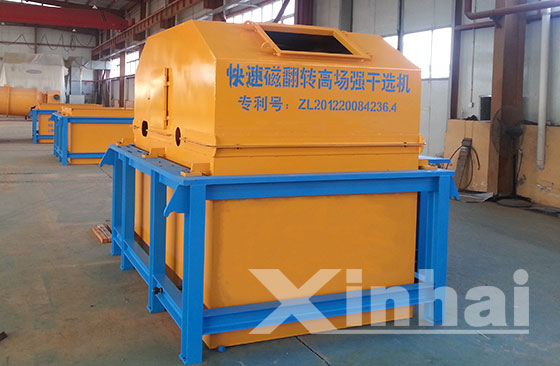 Usually, the primary grinding or secondary grinding will be adopted in vanadic titanomagnetite beneficiation. According to the principle of ore rational dissociation, the ore disseminated by coarse grain or medium grain is suitable for primary grinding. However, the second grinding can be classified into continuous and discontinuous grinding, according to rejection of tailings in advance. Vanadic titanomagnetite beneficiation usually adopts the magnetic separation process, and discharges the gangue and weak-magnetic minerals by adjusting the parameters and process structure, acquiring the iron concentrate containing. During the separation process, especially when titanomagnetite is the main final product in vanadic titanomagnetite, grinding particle size is the main factor to be considered. At this time, vanadic titanomagnetite is over ally considered as a kind of ore that contains magnetite, ferrotitanium spar, spinel, and tabular titanomagnetite. Vanadic titanomagnetite has coarse mosaic granularity, belonging to the coarse or medium particle-disseminated mineral. In recent years, taking advantage of high-titanium type iron ore, China does blast furnace smelting and succeeds in reaching the best index when the amount of iron is about 53% and TiO2 is about 13% in iron concentrate.