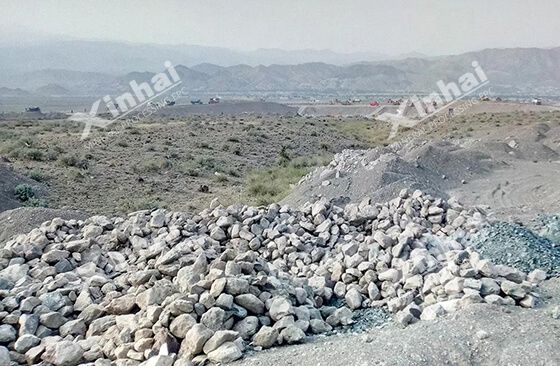 Copper is one of the important non-ferrous metals, which is often separated by the flotation process. According to the different oxidation rate of ore, the copper ore can be divided into copper sulfide, copper oxide and mixed copper ore. The copper flotation process used in the various copper ores are also different.

The mineral composition of single copper sulfide is simple. The copper minerals mainly include chalcopyrite, chalcocite, bornite, covellite and a small amount of copper oxide minerals. The gangue minerals vary with deposit types, mainly including quartz, calcite, feldspar, dolomite, sericite, chlorite and so on. Due to the great difference of floatability between copper minerals and gangue minerals, the flotation process is often used for the separation of single copper sulfide. 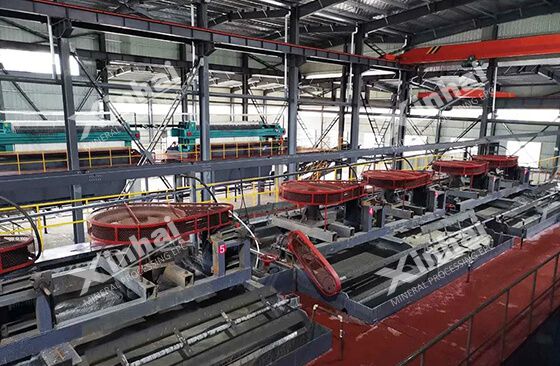 This copper flotation process is suitable for treating the ore with coarse uniform disseminated grain size. The combination between copper minerals and gangue is loose, and the contact edge is smooth and flat.

When the raw ore is grinded to -200 mesh accounting for 50-60%, the copper minerals can be basically monomer dissociated. The good flotation indexes can be obtained after roughing and scavenging, one to three times of concentrating. This copper flotation process is featured with simple flow and low cost, which is mostly used in small and medium-sized copper concentrators. 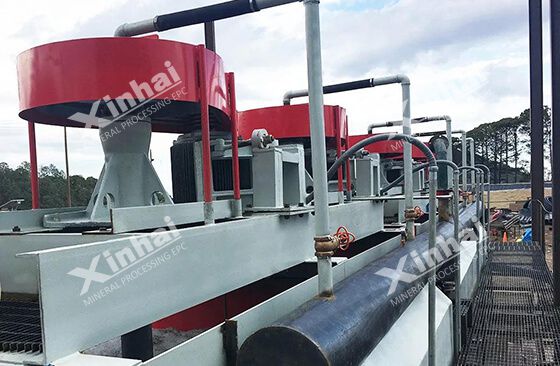 This copper flotation process is mostly suitable for treating the single sulfide ore of porphyry copper or copper-molybdenum ore.

According to the distribution of copper minerals, the raw ore is grinded to -200 mesh accounting for 40-70% by the one stage grinding, and a large number of tailings are thrown away by roughing and scavenging. After the regrinding of coarse concentrate, the copper concentrate can be obtained through two to three times of concentrating. The tailings of one time of concentrating in the flotation cycle can be discarded after scavenging or return to the roughing cycle after concentration. A few copper concentrators will regrind the middlings separately and then process them. This copper flotation process can make the copper concentrator get a better economic benefit when the raw ore grade is low and the processing capacity is large. In addition, because the regrinding of the coarse concentrate and fin particle size, the monomer dissociation degree between copper minerals and gangue minerals, pyrite is better, and the flotation concentrate quality is also higher. 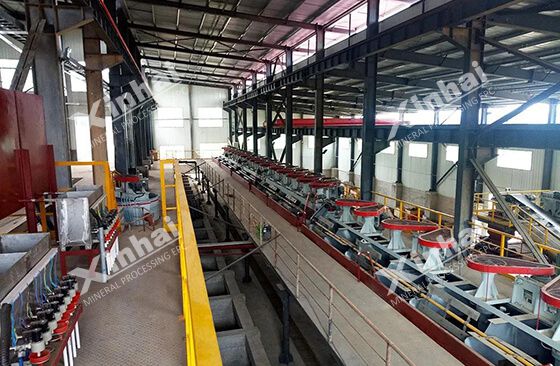 For the uneven distribution of copper ore, the ore needs to be ground to -200 mesh accounting for 80%, or even more fine in order to achieve the monomer separation of most copper monomer. At this point, two stage grinding is superior to one stage grinding both in grinding efficiency and in preventing overcrushing of copper minerals. 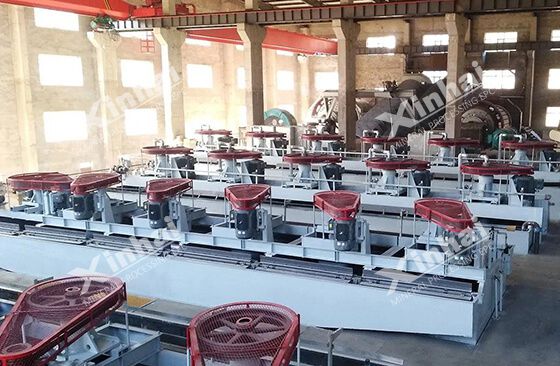 In general, the polymetallic copper sulfide not only contains a variety of copper minerals, but also often associated with pyrite, galena, sphalerite and other minerals, the mineral structure levels and composition is more complex, and the symbiotic relationship among minerals is dense. Based on the above ore characteristics, the flotation processes of polymetallic copper sulfide mainly include the following categories: Staged preferential flotation is suitable for the complex copper sulfide ores, whose copper ore types are complex, mainly azurite and arsenite. Although the focus is still on the separation of copper and sulfur, the conventional flotation processes cannot produce the qualified copper concentrates due to their complex structure. 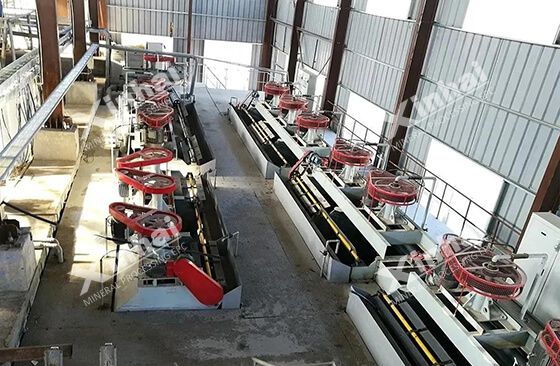 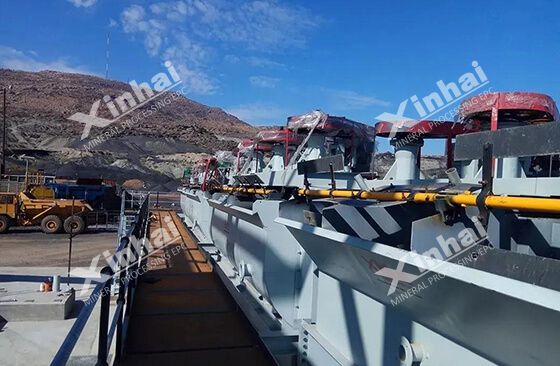 Fatty acid flotation process uses the fatty acids and their soaps as collectors, and the gangue inhibitor (sodium silicate, phosphate) and pulp regulator (sodium carbonate) are also added in the flotation process. The fatty acids and soap collectors can float the malachite and azurite greatly. When adopting the fatty acids with different hydrocarbon chains to float the malachite, the collecting ability is very strong as long as the hydrocarbon chain is long enough.

The fatty acid flotation process is mostly used for the copper oxide whose gangue doesn’t belong to carbonic acid salts. If the gangue contains a lot of iron, manganese, the flotation index will get worse, and the ore slime will also lead to the failure of fatty acids. 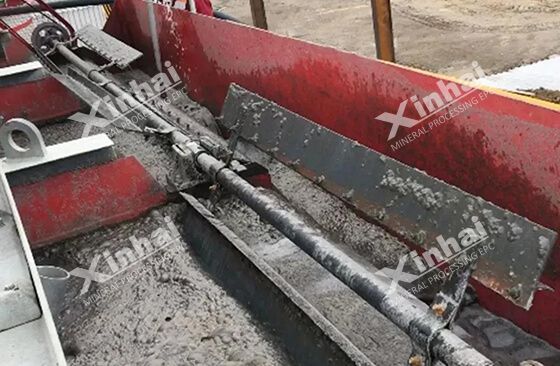 The amine collector is selective to the copper oxide. Because the amines also have a collection effect on many gangues, it is necessary to finish pre-desliming before separation. But for the argillaceous copper oxide, the pre-desliming will lead to the copper loss. Therefore, the premise of selecting the amine flotation process is the selection and control of gangue inhibitors. At present, the common gangue inhibitors include seaweed meal, lignosulfonates (or cellulose lignosulfonates) and polyacrylic acid. 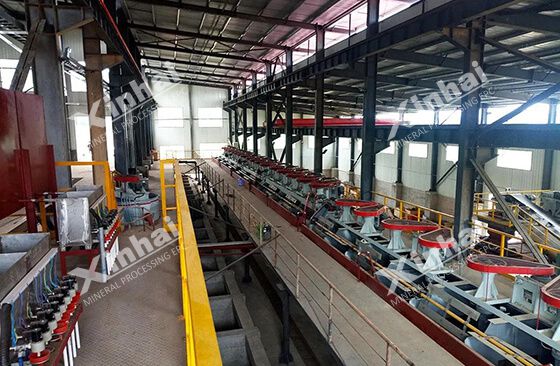 This method uses some kind of chelating agent and neutral oil as the collector to complete the flotation process, which is mostly used for refractory copper oxide (such as malachite). It not only has a good selectivity and collecting effect, but also can ensure a higher flotation index, reduce the reagents consumption. Besides, the chelating agent also has a selective inhibition effect. 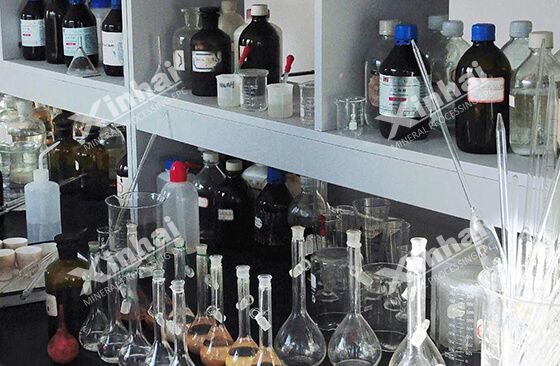 This flotation method is mainly to vulcanize the copper oxide minerals first, and then add copper complexing agent to create a stable surface of lipophile minerals, then cover the mineral surface with neutral oil emulsion to create a strong hydrophobic floating state, so that the minerals can be firmly attached to the froth, thus completing the separation. This flotation process is an extension of the conventional sulfide flotation process. The sulfidation is completed under the condition of hot pressing, the sulfur has the chemical reaction with copper oxide under the condition of hot pressing, thus to obtain a stable and graded artificial copper sulfide minerals, and the copper is recycled in the warm water by the mean of copper sulfide flotation. This method strengthens the pretreatment-pre- sulfidation process of ore, but has the high temperature requirement, large fuel consumption and long sulfidation time.