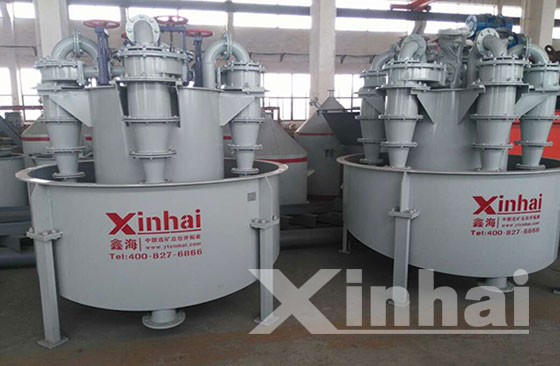 According to different fine grinding medium, silicon grinding work can be divided into dry grinding and wet grinding, while wet grinding is the most common crushing technology. Ball mill and rod mill is two of the most commonly used grinding machines in silicon fine grinding. Ball mill and rod mill cannot control its final particle size itself, so they are often used along with classifier. Hydro-cyclone is a classifier which is usually used after ball mill. As an advanced silicon classifier, XCIII hydro-cyclones made by Xinhai is widely used in mining process line.

When hydro-cyclone is working, ore pulp enters the shell at a tangent under the pressure and while doing rotation movements inside the stator. The coarse particle goes into the outer ring of rotary current under the centrifugal force, then discharged from the heavy spit and becomes underflow. While the fine particle goes into the inside ring of rotary current under less centrifugal force, then uplifted and becomes overflow.

According to the principle, XCIII hydro-cyclones are designed. As one of the classic product in Xinhai, it has a special fishtail shaped device and siphon device in the top of overflow box, which makes XCIII a great classifier. We can gain a higher density underflow and lower density overflow by adjusting the siphon device. As for silicon industry, through adjusting the overflow density could be the same as water and underflow could reach 85%. Moreover, Fishtail shaped device could guarantee stable underflow density in the circumstance of feeding and feeding pressure change in a certain range.

As an advanced silicon classifier, Xinhai XCIII are widely used in mining process line and gain many appraise.