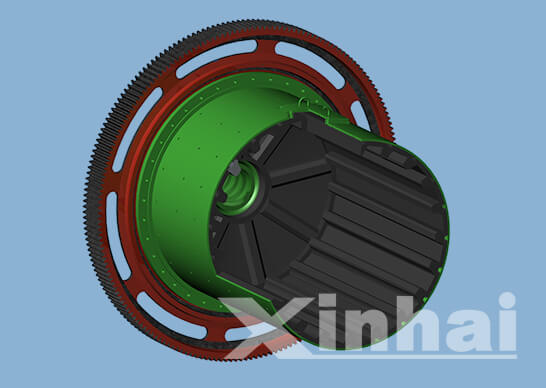 High manganese steel is invented by Hatfield in  England. The main features of the components are containing 0.9-1.4% carbon,  10-14% manganese. The impact strength is around 150j/cm2. After water  toughening, it becomes the single austenite structure. The reason for its  anti-abrasion is that after the impact, it causes surface hardening phenomenon.  The initial rigid of it is HB 179-229. The rigid after abrasion is HB 240~350,  (after full hardening, the rigid strength can be up to 605 as the highest). It  states that the high manganese steel liner plate when is in use, especially in medium  and small sized ball mills, fails to fully play its anti-abrasion. Moreover,  the yield strength of the high manganese steel liner plate is relatively low, so  it is easy to have the plastic deformation, making the liner plate bulge or may  even snap the construction bolt to have the liner plate be difficult to disassemble.  High manganese liner plate is frequently used in the earlier stage of China. Later  with the development of metallic materials and anti-abrasion rubber materials,  it is used less and less in the liner plate of ball mills. In production, the  high manganese liner plate is generally used in the coarse grinding operation  of primary grinding.

When  selecting the liner plate materials of ball mills, at the premise of  anti-abrasion rubber, we should give priority to Xinhai Anti-abrasion Rubber  with good nature. Comprehensively considering the practical situation of  production, we can make the industrial production efficiency to its highest and  the production cost to its lowest.

New Development on How is Phosphate Mined

What are the differences between the wet ball mill and dry ball mill? And how to choose?

The Gold Ore Processing Methods According to The Difficulty of Separation